What is a Supercritical Fluid ?

For each pur compound there are three thermodynamic states: solid, liquid and gas. The triple point (see above) corresponds to a given temperature/pression couple, in which the three states coexist.

There is also a temperature/pressure couple where the liquid and the gas phases have the same density, this is the critical point. Beyond this point, this is the supercritical domain of this compound where only one phase exists. There is no state change between the liquid and gas phases, the transition is continuous and homogenous.

The fluid will be neither a gas nor a liquid, but will possess the properties of both phases.

- diffusivities higher than liquid (close to gas) which provide them a better penetration in porous environment,
- viscosities close to the gas ones which favor material transfer
- densities like liquid, so they are good solvents.
Comparison of the properties of gaz, liquid and supercritical fluids

The major expertise to handle efficiently and economically supercritical fluids is to master the use of high pressure: This is where Top Industrie is expert!

You may think using SCF as solvents everywhere where solvents are used. The supercritical fluids the most commonly used are CO2 (Tc = 31°C, Pc= 74 bar) and water (Tc = 374°C, Pc =221 bar) in sub or supercritical state, and they are sometimes combined with ethanol or other green solvents.

They are attractive as they are harmless, non-toxic, non-flammable and cheap.

Moreover, we are used to adapt and set solvent properties to the application just playing with pressure and temperature. 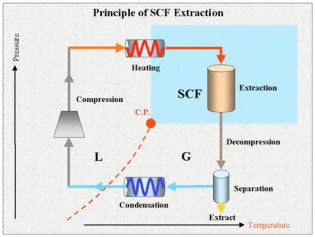